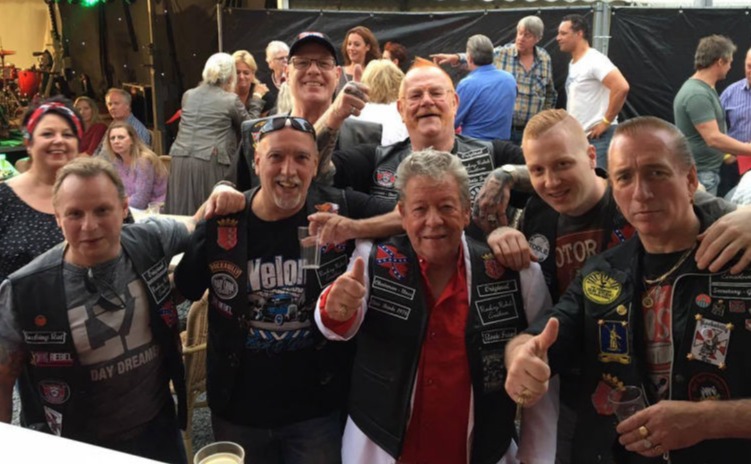 Louis Smeets has been active in the Rock & Roll scene since 1958 and is seen as the most important advocate for Rock & Roll music in Dutch radio, which he did through a radio program "The Rock & Roll Method". He produced this together with presenter Felix Meurders in the period 1973-1982, on national radio.

Very early, around '51, Louis came into contact with Dutch - Indonesian people and their musicality. Through those friendships he ended up in various bands.
Louis's mother was seriously ill and could not cope with caring for him, so Louis moved for a while to an aunt in Brussels. There he saw The Tielman Brothers perform for the first time in the Expo (1958) and you were sold on their kind of music, which later became known as "Indorock".

In 1958 at the age of 14-15 Louis already sang in the rock & roll band The Blue Aces, a so-called Indo Rock band. He bought an Egmont guitar (product from Eindhoven)  and with his more than 10 years of piano experience, he was able to master guitar playing a bit. That was followed by The Hot Toppers, and The Black Rocking Kids and he played in The Silver Bullets, the forerunner of the successful Dixie Aces.

Louis; ''The hot Toppers came out
Grevenbicht (near Sittard). I did about 4 gigs with this band around 1960. We were then ready and had a playlist with 25 songs for a gig. I sang and played guitar. For four performances we received NLG 100.00 and some drinks. It wasn't much, but me and my friends were just so proud that we got to perform.

After a performance it was mostly too late to travel back home and I spent the night with the Dutch-Indonesian people in Grevenbicht.
There were thirteen of us, and we slept all in one double bed. In the evening music was spontaneously made. Grandpa came out with his Hawaii guitar, father played drums, and usually there were some uncles and nephews around that joined these jam sessions.. That way you always had a pleasant evening. This left a deep impression on me.''

“DO YOU WANNA DANCE?/”DANCE ON” KILLROY3508 HOLLAND 1985 (accompanied by The Explosion Rockets)

When Louis was seventeen he sang with the HOT TOPPERS one of the leading Rock and Roll bands in central Limburg (province in the South of the Netherlands). After Louis won a local talent show and became the Limburgian CLIFF RICHARD, he would participate with a number of band members in the Dutch CLIFF RICHARD elections in Zwolle (NL). Of course the HOT TOPPERS rehearsed hard and told Louis they would play the songs 'Gee Whiz It's You' (1960), and 'Move It' (1960), and one more song. Even the Saturday on which they would go, there was still some practicing in the morning. That Saturday, July 29, 1961 at half past one, Ronnie and Louis left with a rented car driven by friend, Jos Minkenberg (19) towards Reuver to pick up the rest. Just outside Roermond, the car encountered a very slippery section of the road and at high speed, they slipped and crashed sideways into a tree. 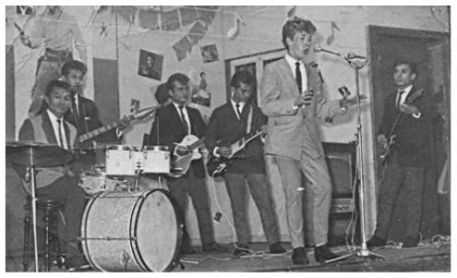 The consequences where very serious, Jos was instantly dead and Ronnie died a short time later in hospital. Louis was also very seriously injured, but survived as the only passenger. His arms and legs were broken and his brain had been hit hard. Louis's diaphragm was ruptured, his mild was severely damaged and left lung collapsed.

The rest of the band were waiting for them to arrive in Reuver when they heard the sad news. The Egmont guitar on which Louis played his rhythm parts was completely shattered. It took more than a year for Louis to rehabilitate.

Louis was a fan of Billy Fury, and started collecting and spinning records from an early age. He married early, and in the quiet first years of his marriage (without gigs and bands) the collection had grown steadily and also became a member of ROCKVILLE INTERNATIONAL which resulted in new interesting contacts. He then started spinning records for the ROZ (Regional Radio-broadcast South) in Maastricht. Felix Meurders who played there too, got in touch and visited Louis at home. Together they couldn't get over Rock and Roll. Felix had come to work in Hilversum (national radio) with the program ''the Rock & Roll method'', but actually did not know that many details about Rock and Roll and initially invited Louis once for the 9th broadcast. That was expanded and resulted in almost 300 broadcasts together. When that came to an end in 1982, Louis got a similar program that aired on the night from Saturday to Sunday. Furthermore, Louis Smeets had 5 rock and roll programs broadcasted on Belgian radio, and he was a programmaker at LRM and TV Ellef until very old age. (over 70) 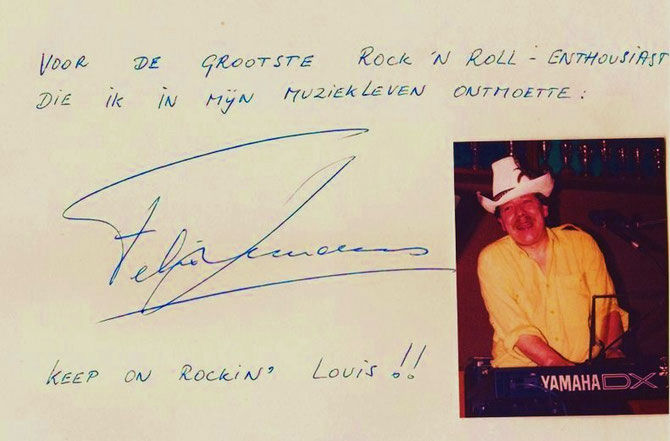 A completely different occupation for Louis was  presenting major rock and roll events. He presented a major Rock 'n Roll reunion in The Hague and several times the international Rock' n Roll meeting Eindhoven. He attended the first of these meetings in Bar EXTASE, also later in Zaal HARMONIE in Tilburg and Hilvarenbeek and then in HET KARREGAT in Eindhoven.

Here he also met the Rocking Rebels, who were responsible for security and a close friendship developed. Louis along with his wife Dolly visited the Rocking Rebels several times after its re-establishment in 2015, and also became an honorary member of the Rocking Rebels. In 2016 he presented the entire music program in honor of the comeback of the Dixie Aces for TV Ellef wearing a Rocking Rebels vest.

He also presented a large Rock 'n Roll festival in Roosendaal, where he met ROY ORBISON, among others. 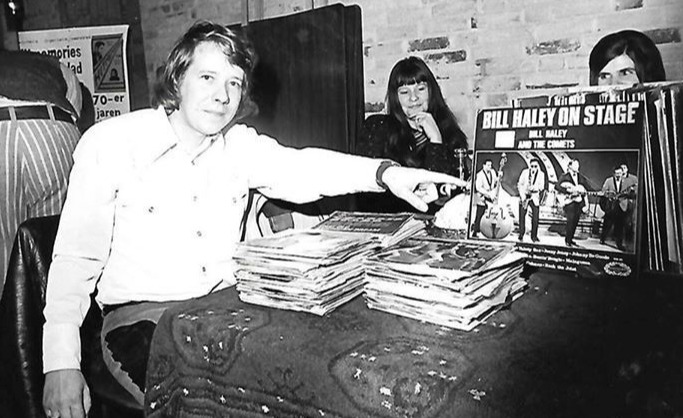 Sound Clip from the Rock 'n' Roll Methode, with the visit and short interview with Rocking Rebels:

Some rebels waren were every now and then hard to reach by phone or mail, but through national public radio this was with the help of Louis less of a problem. The best regards where kindly broadcast to the little stereo rooms in Den Bosch., like here in 1982. 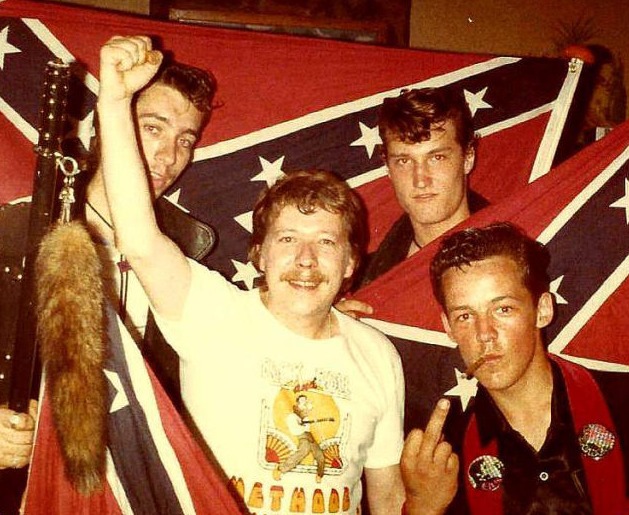 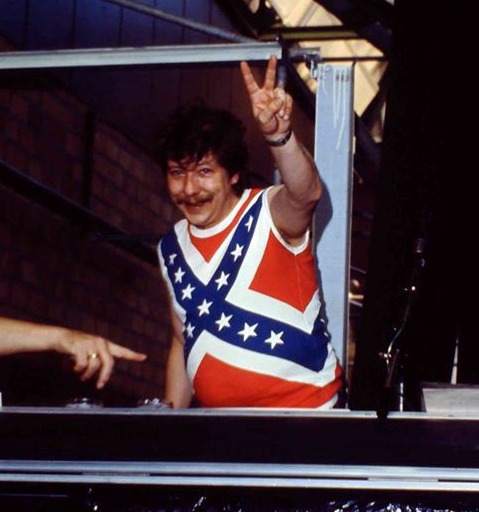 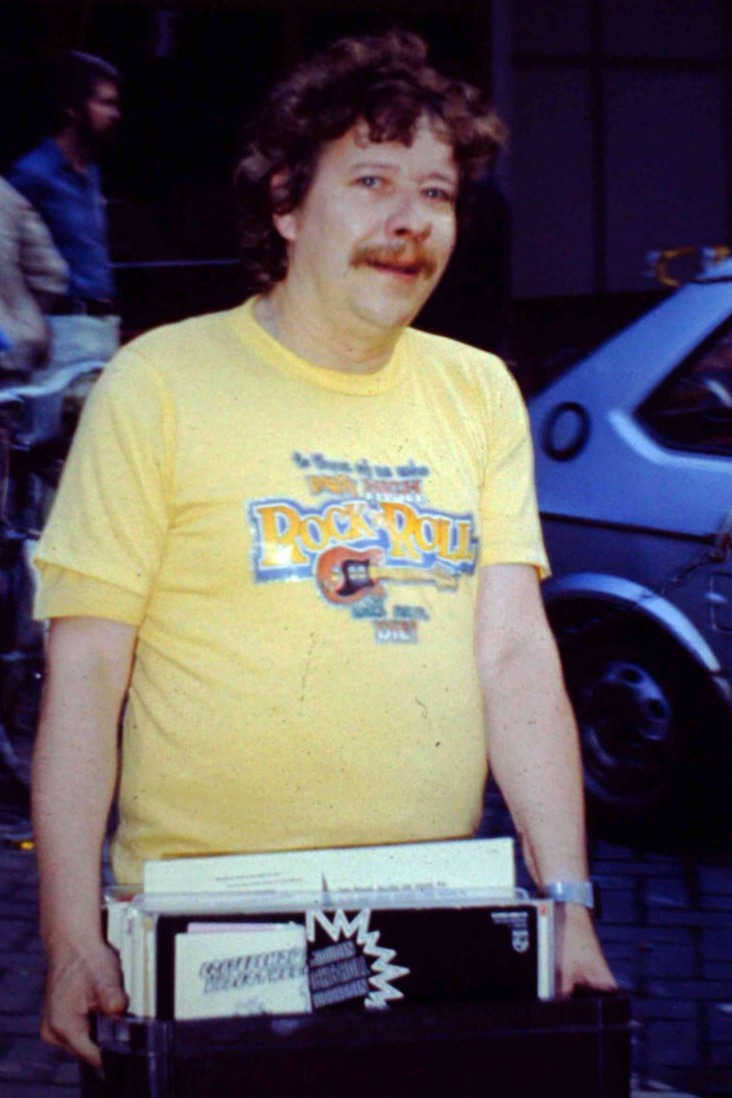 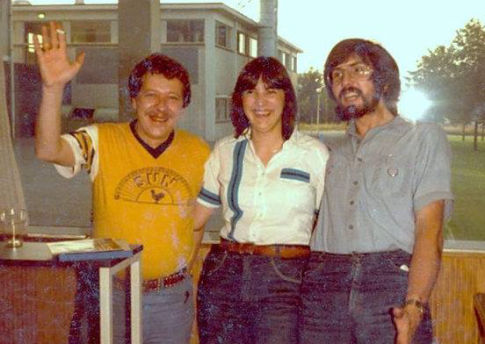 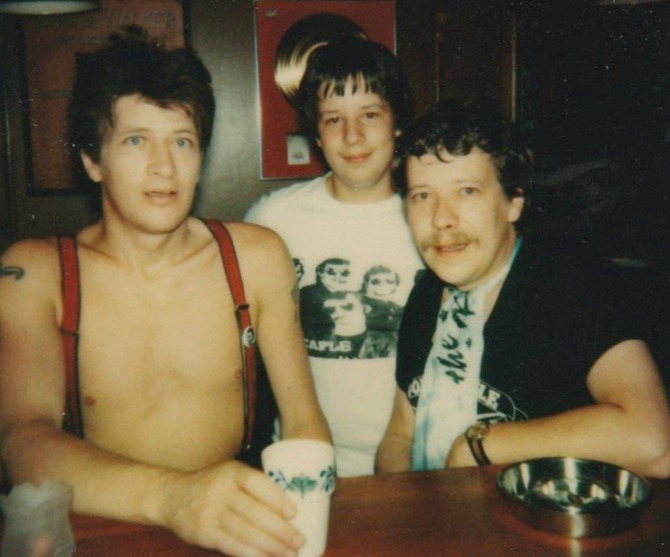 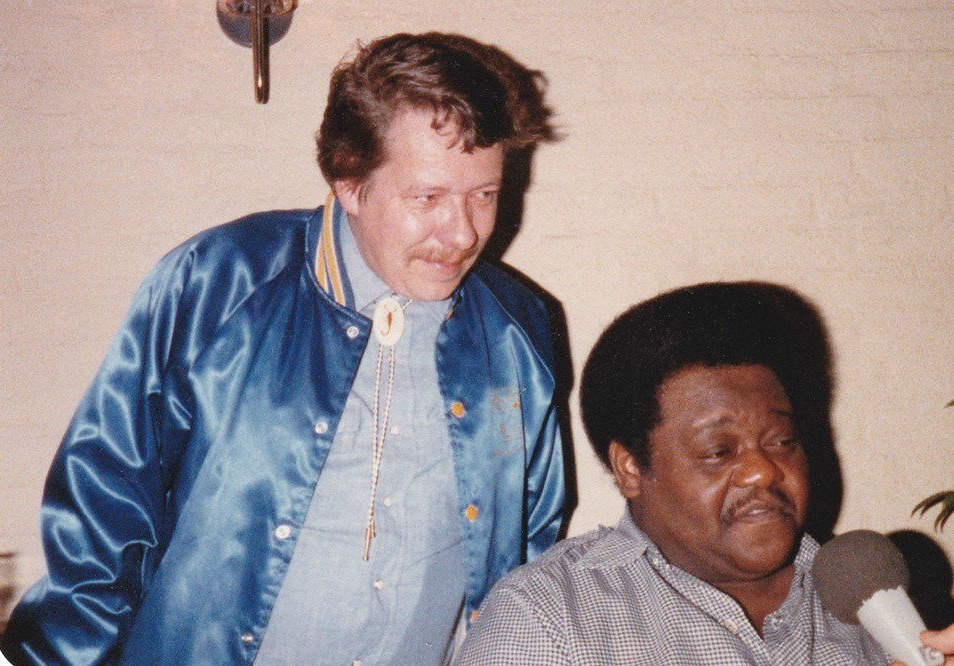 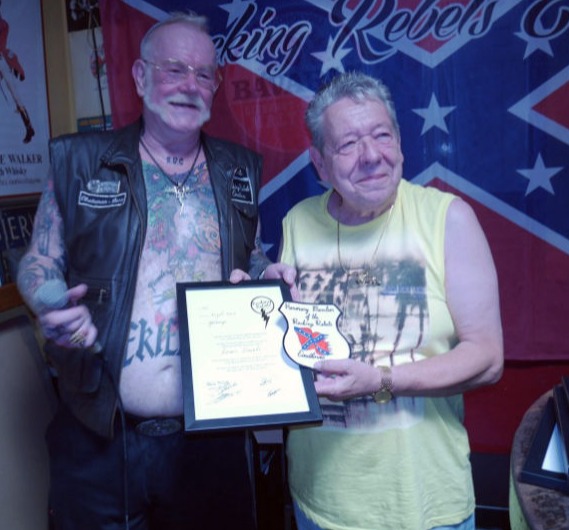 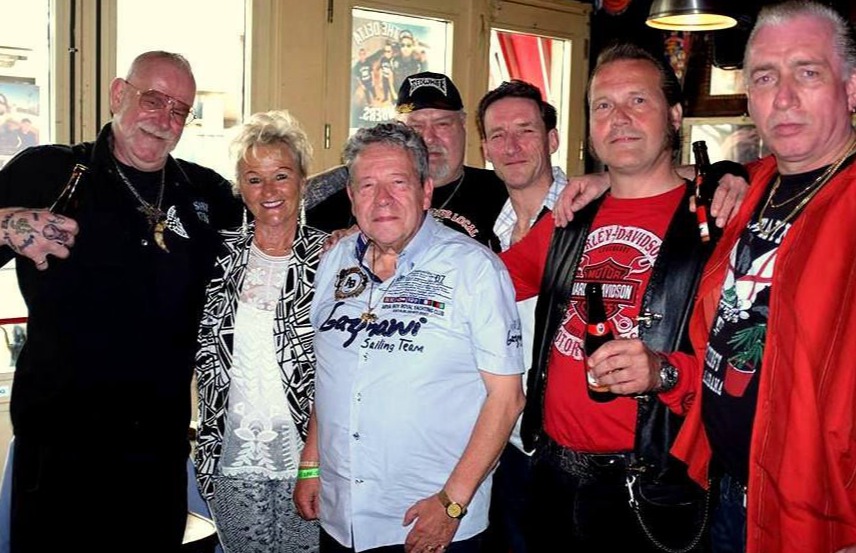 Furthermore, Louis recorded a few gramophone records, and produced a record every now and then, for example, he produced the album of  MAC TAPLE, what at the time the Rocking Rebels houseband was. It got recorded in the RELIGHT STUDIO's (Tilburg NL).  In four days fifteen songs were recorded and mixed. Brood happened to be in the studio because he was recording an album and spontaneously offered to do something on the piano with MAC TAPLE. Jan Rietman also came into action as guest musicians on this album.
Louis himself had been the keyboard player and leader of DIXIE ACES for 25 years, in which his son Bert played solo guitar.

Louis speaks of his best friends when he is with the Rocking Rebels in Eindhoven, where he proudly became an honorary member in 2015. We know him as one of the most loyal advocates for Rock 'n Roll music within the Dutch broadcasting system, and far beyond that. 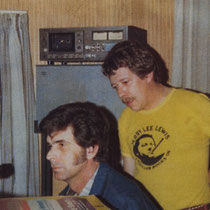 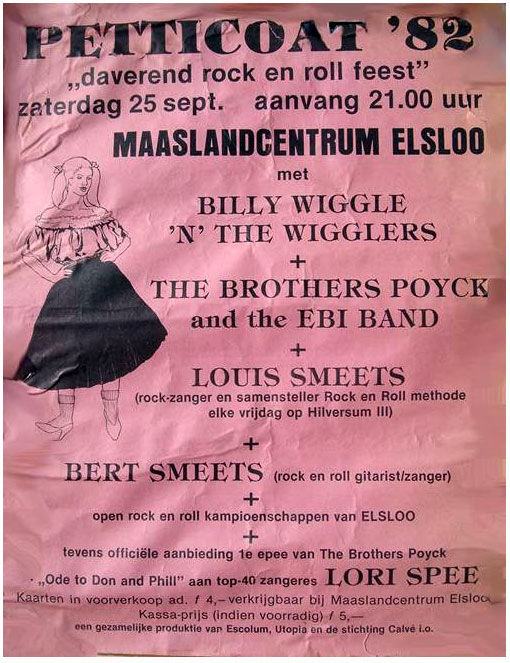