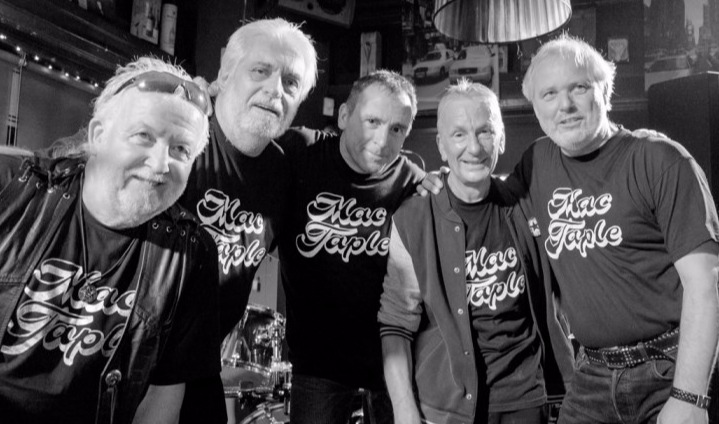 Mid seventies a group of friends were asked to perform as supporting act at a number of meetings and projects in Eindhoven and Tilburg. Venue The Effenaar in Eindhoven had taken Rock-'n-Roll for a theme, a hence the band Mac Taple was formed. Just as Rocking Rebels and many others, also Mac Taple had a break of several years. They picked-up again after being asked as supporting act at the Fats Domino concerts in 1995. In their carrier the played with international ands such as  Roy Orbison, Carl Perkins, Fats Domino’s and Chuck Berry.

The name of Mac Taple came a little from the need to bring some confusion and to resist the music industry of that time. The pleasure was mainly in playing in the audience and preferably without a lot of technology.
Behind the concept of Taple you can think of the Dutch word 'Tepel' (niple)  and the idea of ​​a mother's breast, back to the (mother) roots of music, rock & roll.
They performed once every two weeks for the Eindhoven Rocking Rebels, a youth group with its own clubhouse, 'de Vlugt', under the management of Eindhoven youth work. This group of youngsters was very loyal to Mac Taple and they were allowed to use their clubhouse to rehearse.
One of their favorite songs was Dixie, which referred to the struggle of the Southern States of America, but in the case of Mac Taple also to southern Eindhoven (the South is going to rise again). Many of their fans, rockers and Harley riders also wore the Rebel flag as token of freedom.

The origin of Mac Taple was in the time of the Revival Rockabilly in countries such as the Netherlands and England during the 1970s. It was the time of the radio show 'de Rock & Roll Methode' by Louis Smeets, and Felix Meurders, with popular dutch bands like Long Talle Ernie & The Shakers , Hank the Knife & the Jets, Danny Mirror but also Normaal and Herman Brood.

The pristine figures of Mac Taple, Jan van Riet and Peter Visser, respectively singer and bass player, accidentally bumped into each other.
Jan had his own studio in the attic. In addition to rock & roll, they also made other music and music for others, such as for PSV at the time of Harry Lubse.
The name of Mac Taple came a little from the need to bring some confusion and to resist the music industry of that time. The pleasure was mainly in playing in the audience and preferably without a lot of technology. 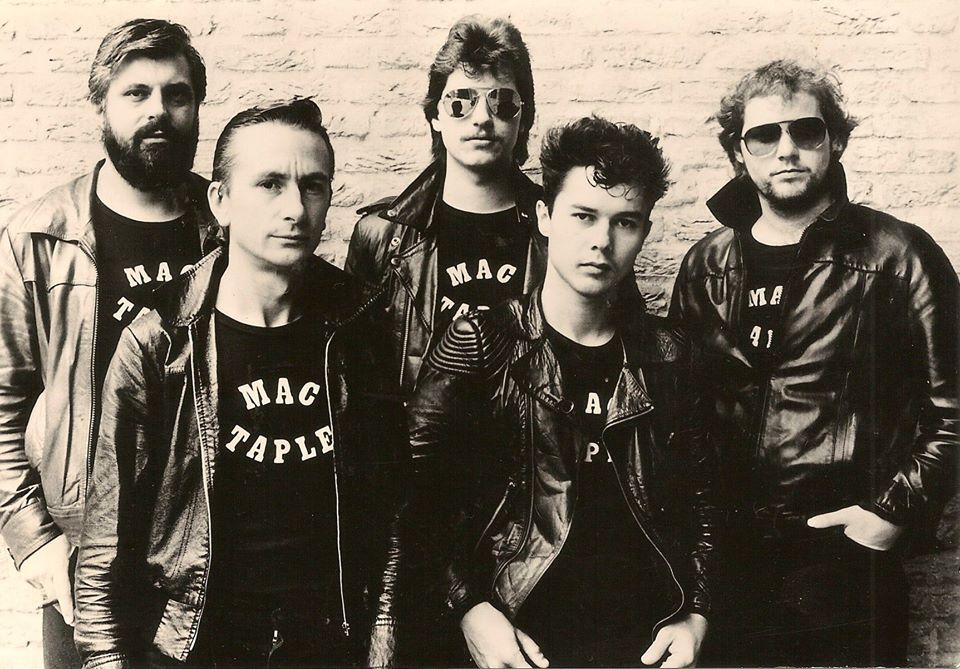 Mac Taple in the seventies 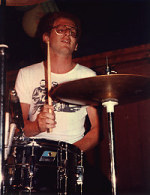 Mac Taple was a band that came up in the same period the Rocking Rebels emerged. One of Mac Taple's first records was recorded at the at the famous Relight studios in Hilvarenbeek (1980). Little Bunny was as song where Herman Brood played the Piano. Producer was Louis Smeets. Herman Brood also played the piano on the album song "She wants to Rock & Roll".

Mac Taple was also one of the main acts of the Eindhoven ''Tuigdag'' in 1980, where they played from 19:00 till 20:00. They where the first band to played followed by Herman Brood and Fredy Fingers Lee. 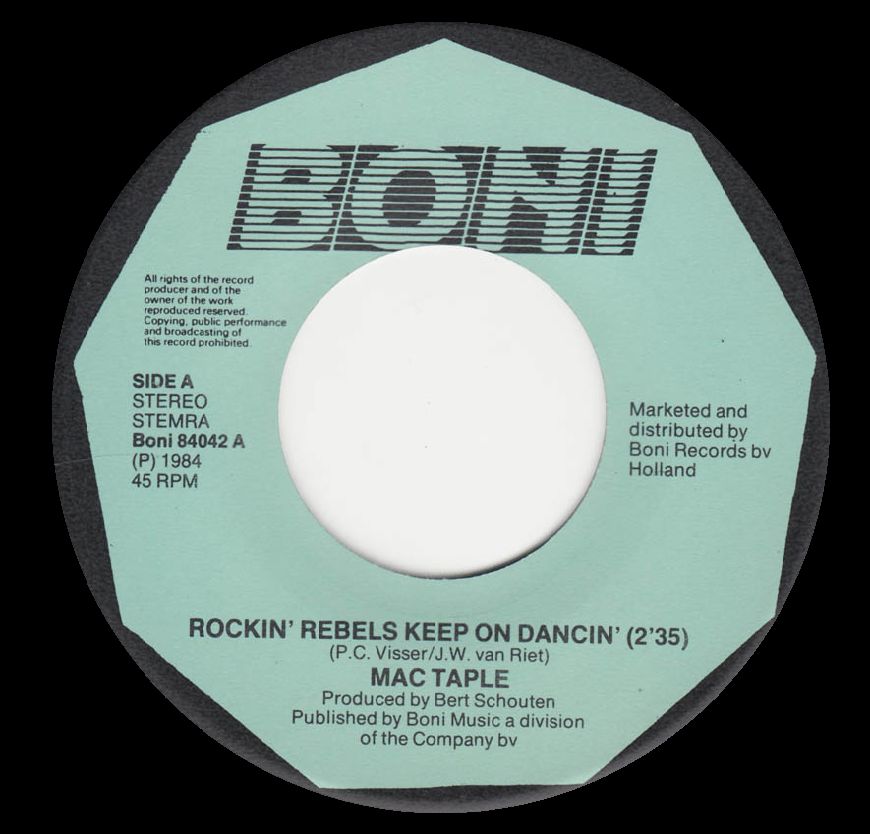 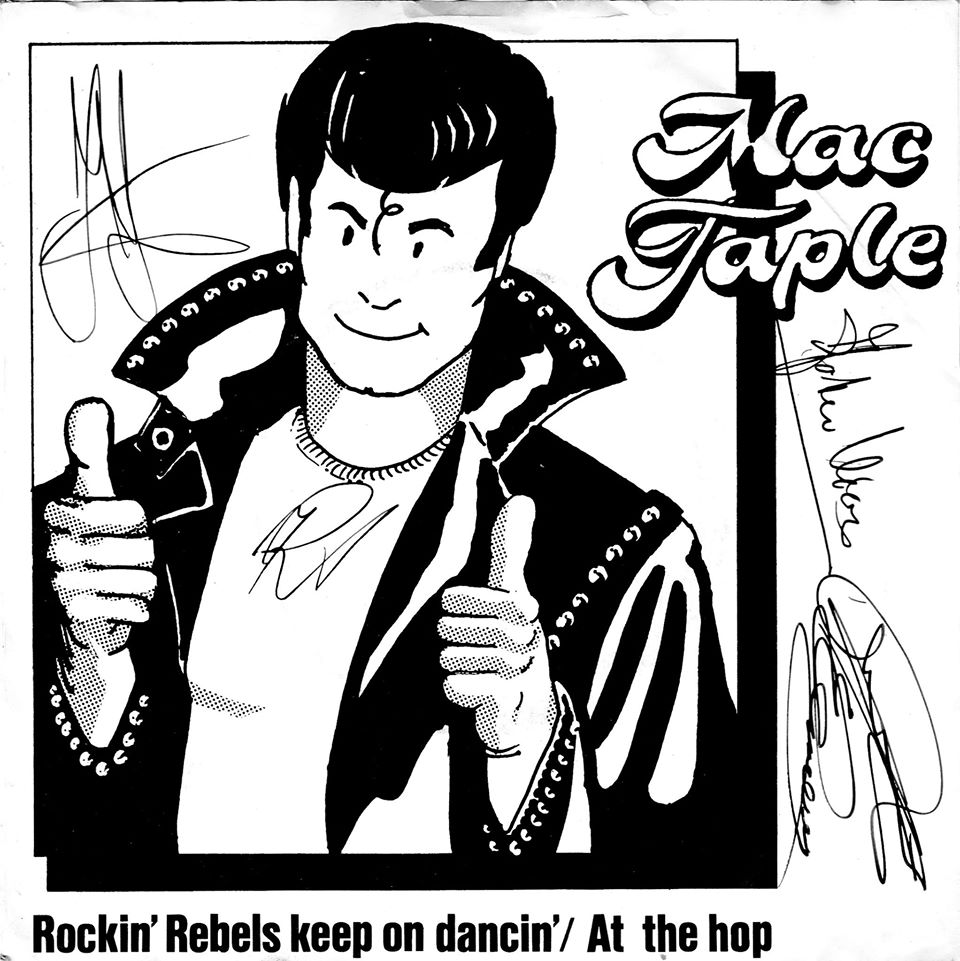 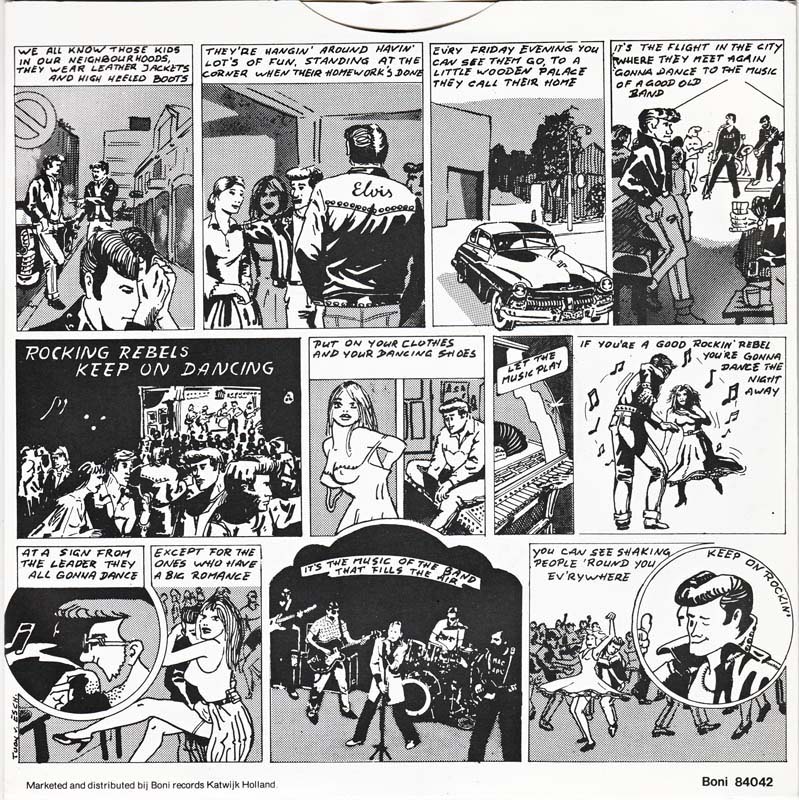 The back of the Single contains a little comic strip 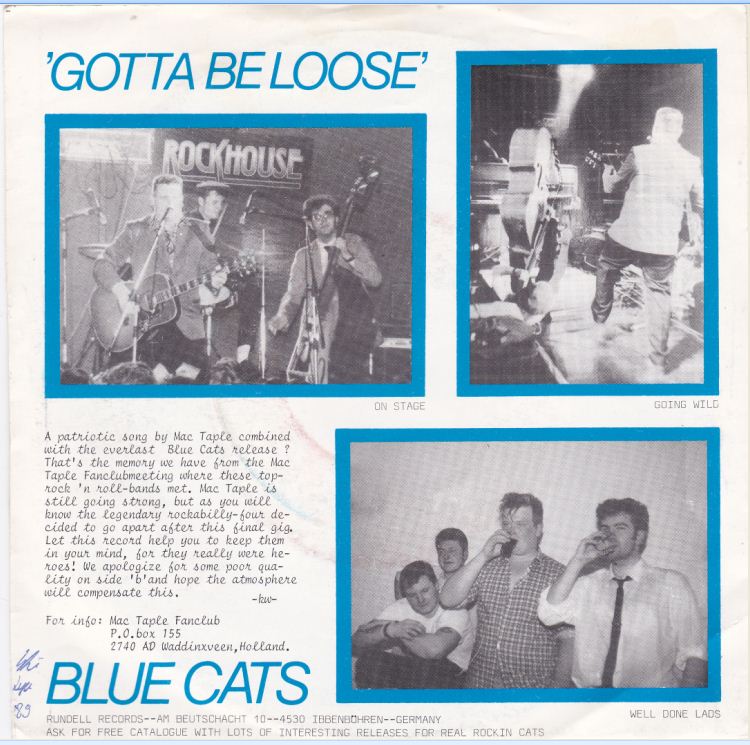 Klaas Westerbeek founded a Mac Taple Fanclub, with real club magazine with 6 editions a year during Mac Taple's glorie years. Eventually 20 editions were issued, and they became a collectors item. The magazin Mac Taple 'Bookie' was not only about Mac Taple, but had articles about the entire Rock & Roll scene at that time. 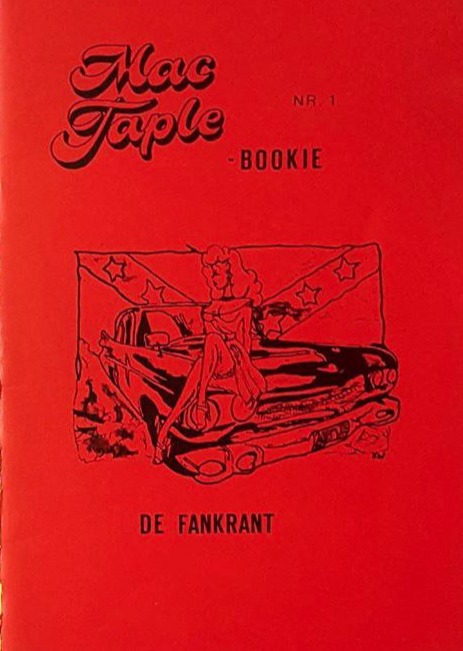 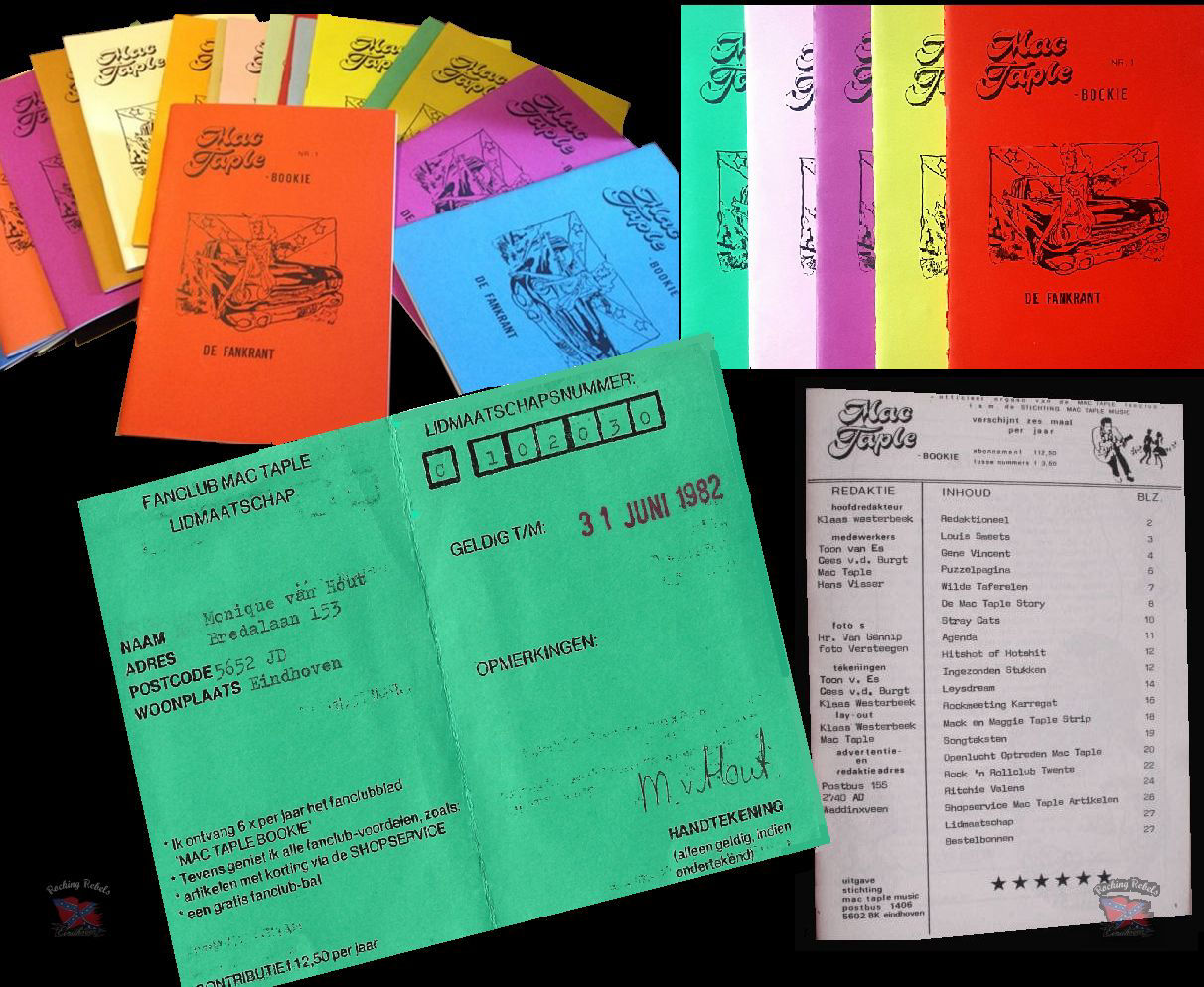 During the 5th annivesrary of  Mac Taple fanclub at venue: 'De Beurs', St Oedenrode near Eindhoven were besides Mac Taple also  played the Hillbilly Caps, The Blue Cats, and the Shakin' Arrows.  There where around 850 people,  a mix of traditional rockers, Mac Taple fans, Teddy Boys and a lot of neo rockabillies. A small world with all people that kept crossing the Rocking Rebel paths for a period well over 40 years.
Mac Taple performed as a house band in 'Tros Rock Planet' (1979), played with Normaal and many others in Los Vast (NCRV - Jan Rietman....yes, almost the same name but somebody else), were live at Veronica 'Countdown Café', and performed with Normaal during the first Open Air Festival. It was a famous circuit of artists that met regularly. 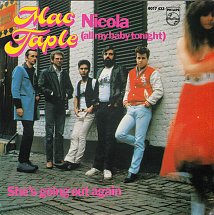 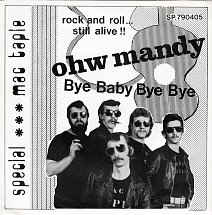 In 1983 Chuck Berry had to appear on Stage in Eindhoven, but luckely Mac Taple was the supporting act and saved that gig. While 2500 people where waiting on Berry they played all the songs they had in their  repertoire, to keep the audience calm... 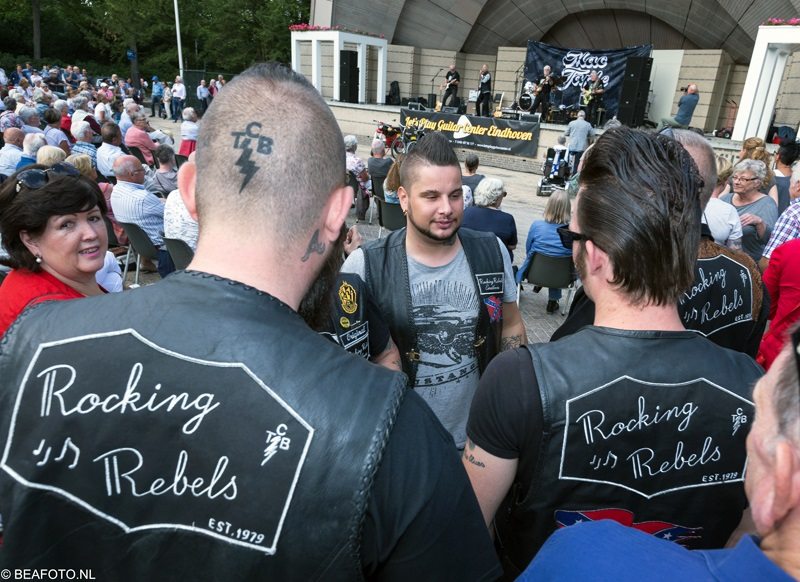 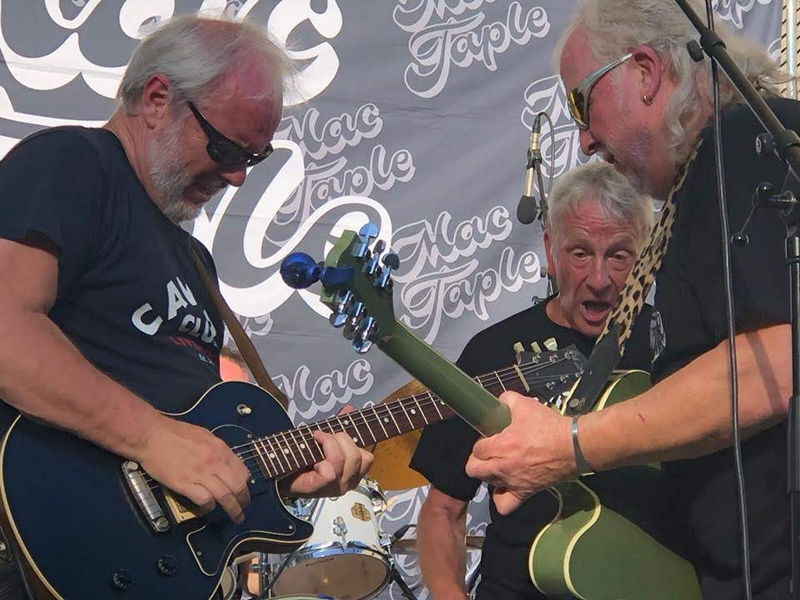 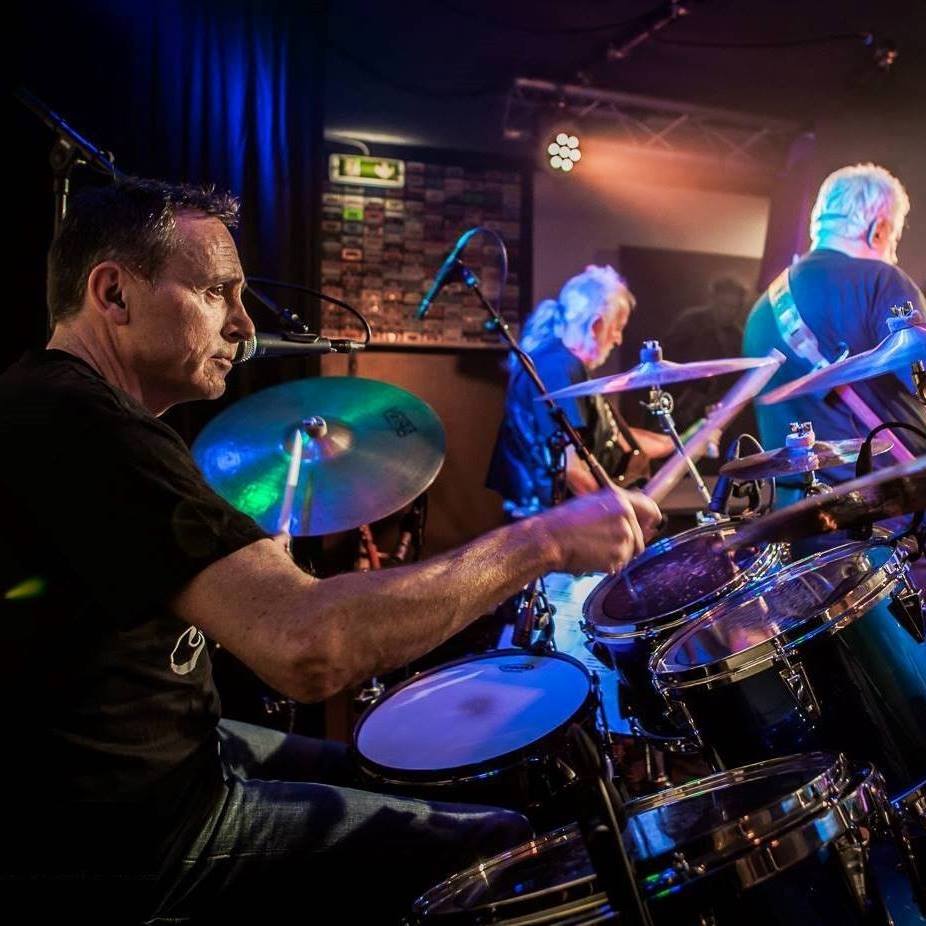 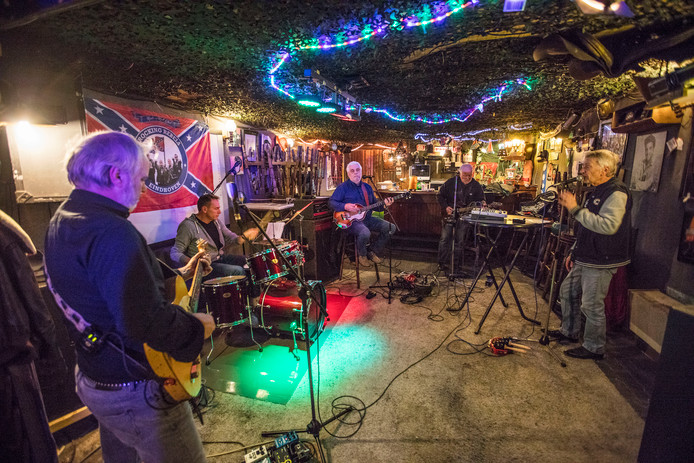 11 March 2017 was another highligt where Mac Taple played in the Cavern and gave two shows on this famous stage. The Cavern programmers were charmed by the special repertoire though Mac Taple is not a Beatles tribute band. 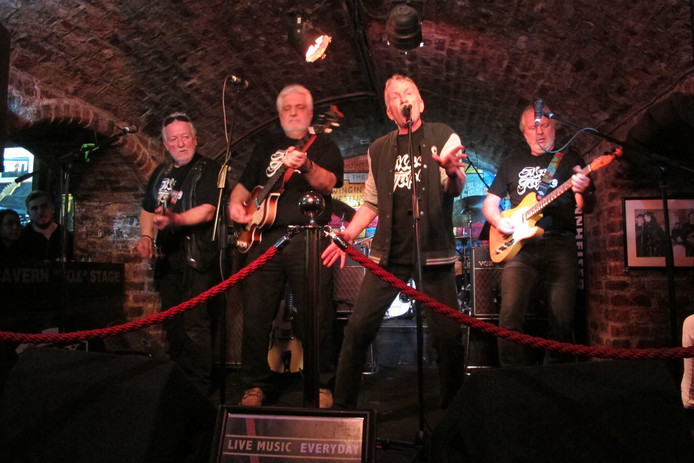 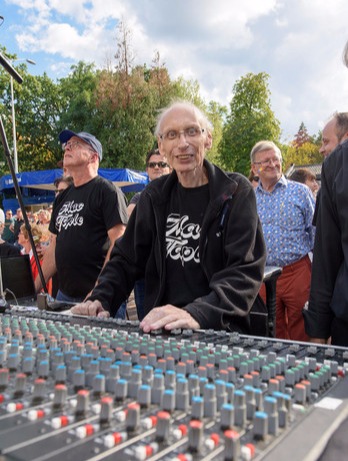 As with so many bands in this genre, there was never a real breakthrough for Mac Taple, they had a single hit in the Netherlands with the single 'Nicola'.  Playing at Mac Taple became too intensive to keep a job, but not enough to provide you with an income. So several musicians went on and Mac Taple remained a successful semi proffesional band. 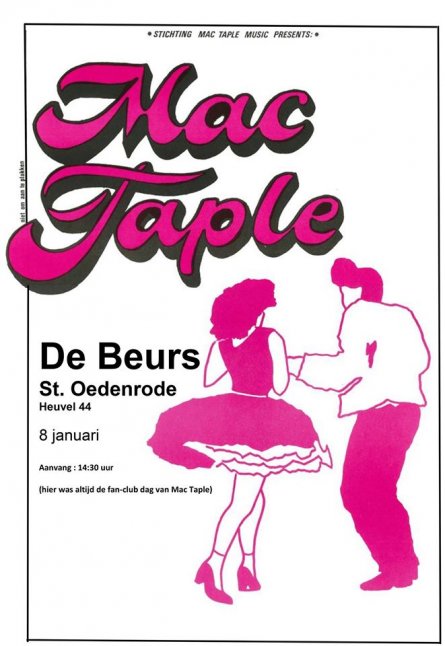 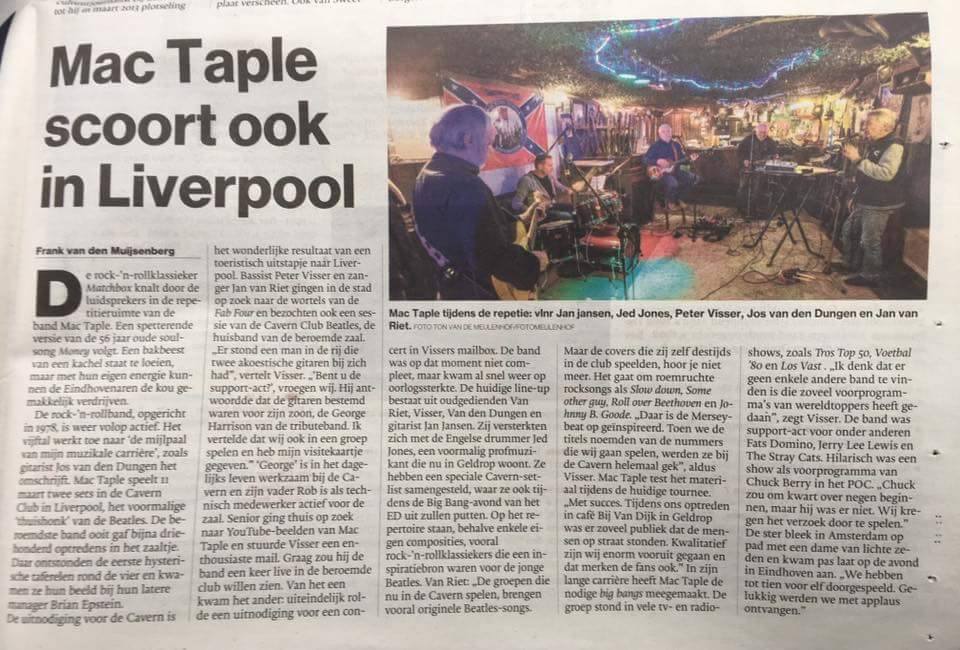